You are here: Home1 / Eco-Schooling in Tanzania
PreviousNext
12345

Mkindo village in rural Tanzania is in the foothills of Nguru South Mountains. 80% of the population in Mkindo are subsistence farmers, growing rice, bananas, and sweet potatoes on the fertile soils within a 2-mile radius of the village. Most homes have no electricity, and the little electricity which exists is astonishingly unreliable; in March there was a power cut lasting almost 4 weeks. Although there is a modern tarmac road running alongside the township, connecting the community to other towns and cities, very few people own a car. People also produce far less waste. In Tanzania it is estimated citizens produce more than 5x less waste per day than the average person in the UK.

Although many of these low-carbon decisions stem from economic necessity, it is surprising how aware people are of the climate crisis. Even the only primary school in Mkindo is an Eco-School. An Eco-School in Tanzania is very similar to those in the UK. The school has an eco-committee and teachers focus their learning on environmental issues, even taking part in Friday’s for Future.

The elected committee don’t just have a say in matters affecting the school, but also the village and their whole community. In 2017 the primary school received Danish aid for eco projects on the school grounds. The school planted banana trees for pupils’ school lunches and the surplus sold to raise money for school improvements. One of the first activities of the Eco-Schools Committee was to plant grass and flowers in the yard and playground. They reused coloured plastic bottles to create paths and climate change awareness murals were painted to decorate the school.

This is an incredible example of the environmental activism and the success of the Eco-School globally, even in some of the countries with the least wealth. 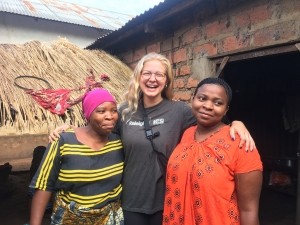 You can find out more about the UK’s Eco-schools programme on our dedicated Eco-schools pages. Devon schools are still eligible for a special offer so please contact the Eco-schools team on eco-schools@keepbritaintidy.org for further information.

Waste Education is back in schools – outdoors!
Scroll to top
We use cookies on our website to give you the most relevant experience by remembering your preferences and repeat visits. By clicking “Accept All”, you consent to the use of ALL the cookies. However, you may visit "Cookie Settings" to provide a controlled consent.
Cookie SettingsAccept All
Manage consent