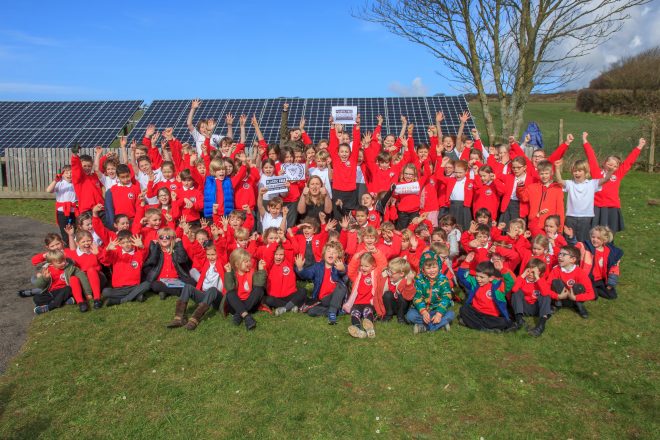 These measures have not cost any extra and are actually saving the school money!

The school also brought the problem of single use plastic to the attention of Devon County Council as they presented some findings to the Council in 2017. Two students and their teacher came to a Cabinet meeting on Wednesday 8th November 2017. They did a great job and in response, DCC created a strategy and action plan to address the use of single use plastics on DCC premises and with wider partners.

Below are the minutes that came as a result of the meeting …..

(Representatives from Georgeham Primary School were invited to speak at the invitation of the Committee and in the spirit of the Council’s Public Participation Rules).

Max: Plastic is an issue and we find a lot of it on our beaches.

Jess: We’ve helped out with beach cleans before and we’ve filled a lot of bin liners with rubbish.

Max: When we walk our dog, he always brings us a plastic thing in his mouth to play with.

Jess: I’ve seen a dead seagull before and it was a horrible sight – it was all open and I could see it had eaten lots of rope and fishing nets which probably caused its death.

Max: At school, our kitchen is reducing packaging and they are stopping using single-use sauce sachets.  We also re-use yoghurt pots for the little kids’ craft lessons.

Jess: We know that children use refillable bottles and every tap in school is for drinking water.

Mr Thomas: There were over 400 Beach Cleans throughout the country over the ½ term break…

Jess: We really hope that when we’re your age, there is a lot less plastic in the environment.

Max: And that we’re using better ways to throw away our rubbish.

A representative of this Council will become a member of the Plastic Free Coastlines Steering group’.

The Mover of the Notice of Motion (wording of Motion outlined above) having spoken seeking the Cabinet’s support for the course of action originally proposed, the relevant Officer’s factual briefing/position statement on the matter, the relevant Cabinet Members’ willingness to endorse the underlying principles therein and their support for the recommendation now before the Cabinet, representations previously made and to actions now proposed or already undertaken and any other relevant factors (e.g. public health, financial, environmental, risk management and equality and legal considerations and Public Health impact) and the Cabinet Members agreeing to undertake an audit of the situation in six – nine months: